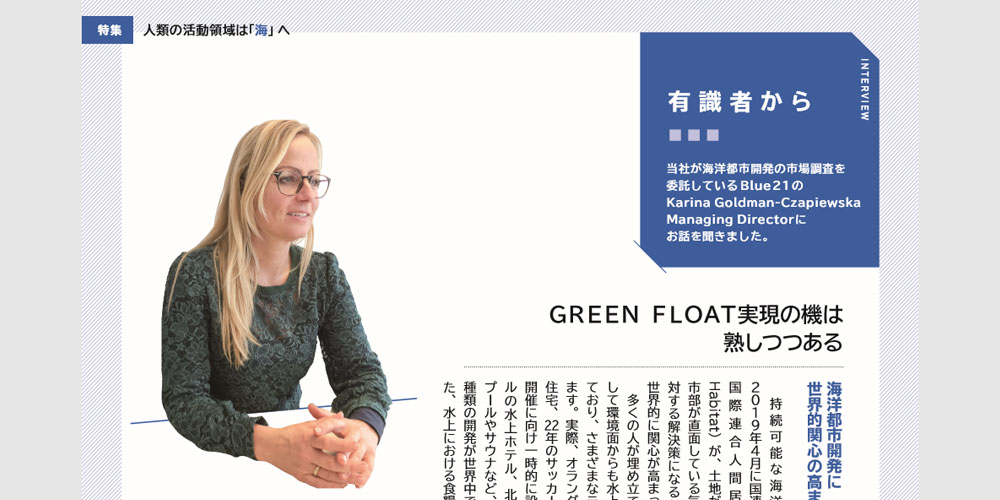 Karina has been active in the field of floating development for more than 12 years. During her studies of Master of Science in Integrated Area Development and Corporate Real Estate Management at the Delft University of Technology, she founded her first company (DeltaSync) after winning the first prize for the global Delta’s in times of climate change contest. Within two years, DeltaSync managed to complete the realization of its first design and building, the floating pavilion in Rotterdam.

A few years later, after changing the focus from inland water to oceans and seas, her second and third companies were founded: INDYMO and Blue21. INDYMO focusses on measuring the quality of water in waterbodies, and underneath and around floating structures all around the world. Blue21 helps governments, construction companies, project developers and innovators in reaching their goals in floating urban development. Blue21 is currently developing its own floating building block system and will finalize this year autumn a pilot on floating solar panels for water retention areas.

Karina has been part of the NEN (Netherlands Standards Institute) committee for the development of standards for floating urban development since 2011 and is (co-chair) of the think tank on the governance of floating structures.

Sustainable floating city development has recently gained increasing popularity. Since April 2019, it is been viewed by the United Nations Human Settlements Programme (UN-Habitat) as a serious solution to climate change threats faced in urban areas where land is scarce. More and more people are inspired by the innovative idea and ecological benefits of building on water as an alternative to land reclamation and have been testing out different functions. In fact, various types of development can already be observed across the world, ranging from large permanent floating settlement in the Netherlands, to temporary floating hotels in Qatar for the 2022 World Cup, or floating swimming pools and saunas in the Scandinavian countries for recreational purposes. More floating infrastructure, transport and logistics hubs have also been proposed, as well as food or energy production on water. Japan, as the world leader in floating solar projects, remains to be the front runner for large-scale marine floating city development with its well tested design concept, GREEN FLOAT. Blue21 has collaborated with the Emerging Frontiers Division, Ocean Programs of Shimizu Corporation since 2018. With current trends and needs of cities, Blue21 deeply believes that the time to realize the first GREEN FLOAT is about to come.

Shimizu corporation has a very unique approach to marine city development. It is not only the first company in the world which has the floating city principles (GREEN FLOAT II) approved by a classification society, but also the company has been proactive in approaching potential visionary leaders in various industries and sectors that might be interested in hosting the first GREEN FLOAT. The team is very hardworking, prudent, yet remains open-minded towards new perspectives and insights. It has been a great honor of Blue21 to assist Shimizu corporation with location scan, market research, and strategic decision making in the development process. With the diligent and highly competent team of Emerging Frontiers Division, Ocean Programs, led by Mr. Masaki Takeuchi, Blue21 has faith that we will be able to find the first home for GREEN FLOAT with the suitable product-market combination. 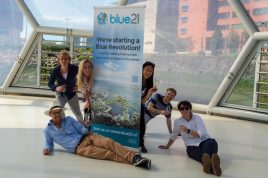